Ravenloft Wiki
Register
Don't have an account?
Sign In
Advertisement
in: Inhabitants of chaotic evil alignment, Darklords from Toril, Inhabitants of Hazlan,
and 3 more 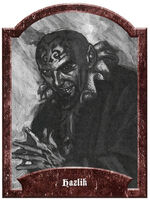 Hazlik was a Darklord that originated in the Forgotten Realms setting.[1]

Hazlik had bald head, covered with ornate tattoos, and a brown goatee. His left eye was brown, while his right eye was blue. He tended to wear long red robes that exposed his hairless, tattooed chest. His voice was noted as being phlegmy and like a hiss.[2]

Hazlik despised both undead and necromancy due to his past history with Thantosya.[3]

Hazlik was known to be often frustrated over being trapped within the Demiplane of Dread and was obsessed with having as much control over his surroundings as possible.[3]

Hazlik was capable of willing the borders of Hazlan to be closed off from all neighboring domains in the Demiplane of Dread by performing an arcane ritual that required concentration to maintain. This ritual entailed him meditating over a brazier that was burning[incense. The ritual would cause immense walls of flame to flare up along the edges of his domain, that could harm even creatures that normally possessed a resistance or immunity to fire, for as long as he remained concentrated.[4]

Hazlik was also capable of automatically sensing whenever an arcane spell was cast within his domain, with the exception of those cast by undead. He would instantly know which school of magic it came from, where it was cast, and could identify what it was as though he had been present to witness the somatic or verbal components that were used.[5]

He permanently had the spells comprehend languages, darkvision, detect magic, protection from arrows, read magic, see invisibility, and tongues cast on his body.[5]

Hazlik typically preferred to attack his foes from afar with spells, leaving his minions to protect him and engage in close-quarters combat. He often sought to end fights as quickly as possible.[5]

On his home plane Hazlik was a rising Red Wizard of Thay[1] of the Evocation school. Over time he created a wide array of unique spells, unusual magical items, and magical beasts that delighted the country's rulers.[2]

In his rise to power, he became an enemy of the necromancer Thantosya. Hazlik coveted her lover, Orliab, but this was the start of his downfall. Orliab, under orders from Thantosya, suggested to Hazlik that they go off somewhere secluded and have a tryst. Having succumbed to his passion for her, Thantosya and his other enemies accused him having assaulted her.[3] For his crimes the court ordered his head and chest be marked with feminine tattoos, the latter making him a pariah among his fellow Red Wizards.[1][3] Humiliated and full of rage, he went to the forests in search of arcane components one day and in a secluded glade he stumbled upon the couple that had tricked him. Ambushing the pair, he cut out Orliab's heart with a silver knife and then forced Thantosya to drink her blood before proceeding to slice her throat.[3]

As he gloated over the brutal demise of his foes, the mists of the Dark Powers arose and claimed him, bringing him into the Demiplane of Dread. The first thing tangible thing he could make out in the mist was a looming white tower, which conjured feelings of dread inside him. Approaching the tower, he saw what looked like the wizards who had tattooed him long ago. Frightened by their presence, he quickly ran away and emerged in a new land.[3] This was Hazlan, a domain that the Dark Powers had created for him to rule over.[1]

For the first twenty five years of his reign Hazlik viciously suppressed the practition of any and all forms of magic within his domain.[3] Transgressing this law typically resulted in being executed.[6]

At some point a catastrophic event affected many domains within the Demiplane of Dread and temporarily transported Hazlik back to the Prime Material, wherein he saw his enemies prospering. Upon being returned to his domain Hazlik had a renewed sense of vengeance, but grew to accept that he would never escape. Thus he decided to overturn the rules prohibiting magic in his domain and founded his own school of wizardry in hopes of finding a worthy successor to his legacy. He had many apprentices, but came to entrust a Rashemi named Eleni above all others.[3]

Hazlik planned to one day transfer his spirit into the body of his worthy successor, following the completion of a complex ritual that he spent much of his time researching. The ritual he sought to execute would theoretically kill every member of the Mulan ethnic group across every plane of existence.[5]

Hazlik was known to possess a headband of intellect, masterwork daggers, gloves of dexterity, a ring of protection, a robe of resistance in the form of a cloak, a wand of fireballs, a wand of magic missiles, and a spellbook. He also owned a yellow gemstone that served as the control amulet for a shield guardian,[2] who he created himself and resembled a wingless fiend.[5]

His familiar was a toad named Lurzed,[2] who was imbued with spells that allowed it to transform into a human and bullywug. He also owned a homunculus that he named Incubolos.[5]

In the domain of Hazlan he resided within a sprawling estate known as Veneficus, just north of the town of Toyalis. In the center of this estate was an immense tower, known to locals as the Red Tower, where Hazlik conducted a variety of experiments and research. Those who lived in his domain saw it as an ongoing symbol of the oppression and fear he impressed upon them.[4] On the southern end of the estate was a cluster of huts where Rashemi laborers lived, who tended to its fields and animals.[7]

Surrounding the estate was a garden,[7] tended by expert gardeners, where Hazlik grew a variety of plant creatures. It had fountains, ponds full of carp, as well as specialized gardens such as one devoted to poisonous herbs and another to funguses. Some of the monstrous plants that inhabited it included shambling mounds and tendriculos.[4]

This estate and other strongholds throughout Hazlan were often guarded by bullywugs, chosen ones, crawling claws, and darkenbeasts.[5]

Community content is available under CC-BY-SA unless otherwise noted.
Advertisement